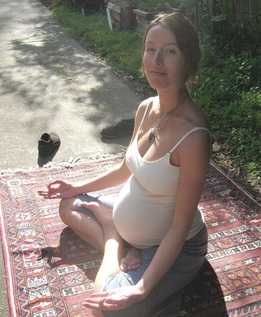 Juliana is an experienced, certified Midwife Assistant, Birth and Postpartum Doula with a background in Prenatal Yoga.  In 2017 she celebrated having attended her 100th delivery.  Families she has supported have had an intervention and Cesarean rate far lower than national averages.  She has taught in pre- and postnatal yoga programs at Alta Bates Hospital in Berkeley, and at numerous studios in San Francisco, the East Bay, and Marin.  Mother of two homebirthed daughters, she began her work as a birth-keeper in 2006. She was the first graduate of Oakland's Cornerstone Doula School, one of the most rigorous programs in the country, focusing on natural birth and a holistic model of care.
​
In 2011, she apprenticed with Leopi Sanderson-Edmunds, a highly-respected, licensed midwife who has attended over 1000 births (including joyfully welcoming both of Juliana's daughters).  Certified in 2012 as a Midwife Assistant through the Midwives College of Utah, Juliana is licensed in CPR and Neonatal Resuscitation.  She believes birthing has the potential to be a magical and empowering rite of passage, and works to support optimal experiences for women and their families both at home and in the hospital.  She is also the author of two non-fiction books published by Penguin Random House.  The first included a piece on Ina May Gaskin and The Farm in Tennessee, famous for pioneering the natural birth movement in the US,  entitled Sustainable [R]evolution: Permaculture in Ecovillages, Urban Farms and Communities Worldwide.